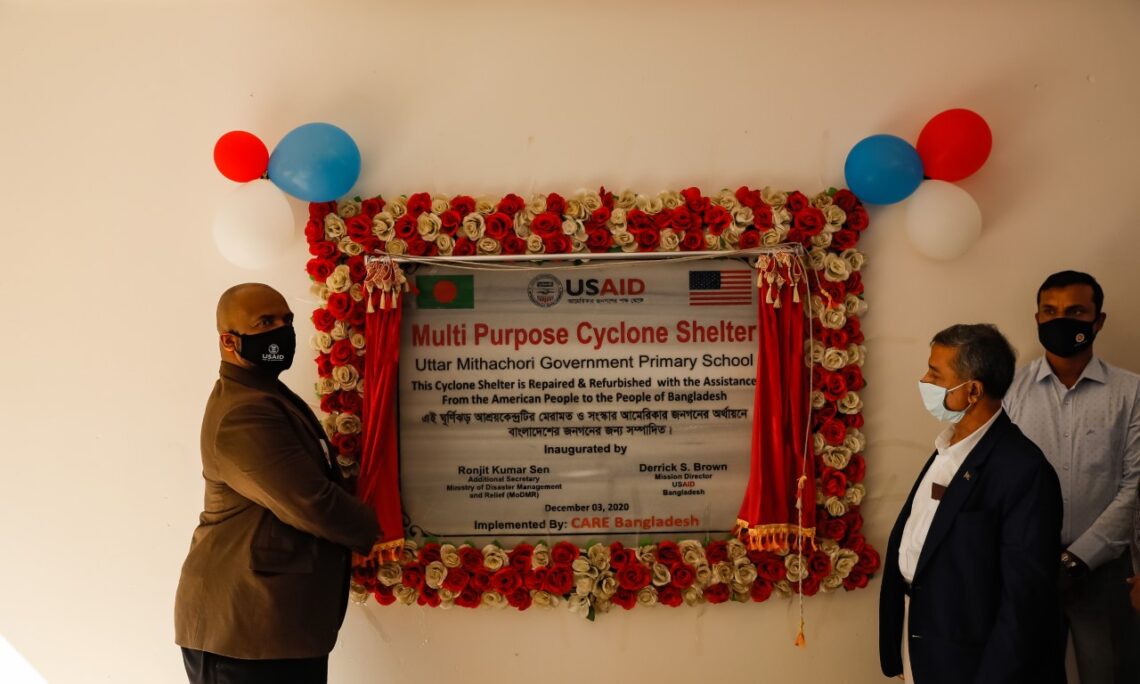 To strengthen the capacity and resilience of coastal communities to natural disasters, the U.S. government, through USAID, is refurbishing 96 existing cyclone shelters to serve as both safe havens and as schools, and constructing 25 new multi-purpose disaster shelters in Cox’s Bazar.

DHAKA, December 3, 2020 – Today, Mr. Ronjit Kumar Sen Additional  Secretary, Ministry of Disaster Management and Relief (MoDMR), and USAID/Bangladesh Mission Director, Derrick Brown, together with other officials from the Government of Bangladesh,  inaugurated a refurbished multi-purpose cyclone shelter (MPCS) in Ramu, Cox’s Bazar.  This is in addition to 11 other cyclone shelters that have been renovated by USAID. The shelter, located at the Uttar Mithachari Government Primary School, can accommodate more than 1,500 people during a cyclone and will provide classroom space for up to 400 students.  This MPCS is one of the 50 already refurbished out of a total of 96 planned under USAID’s Promoting Resilience to Risks of Natural Hazards (USAID/PRERONA) activity in Cox’s Bazar, one of the most disaster-prone districts in Bangladesh.  USAID is also providing support for the construction of an additional 25 new Multi-Purpose Disaster Shelters (MPDS) in Cox’s Bazar and Bandarban through a joint project being implemented by CARE, Save the Children, and local partner, GRAUS.

During his remarks, USAID Mission Director Brown stated, “We are pleased to hand over 12 refurbished shelters including this one today.  These refurbished shelters are impressive, with modern solar power, water harvesting, and supply systems as well as separate washrooms for boys and girls.  But what makes me even more proud – is this will build resilience of the local people during natural disasters.  In addition to functioning as shelters during cyclones, these facilities will serve as schools – providing child-friendly learning spaces, so children from surrounding communities can access life-changing education.”

Both Government of Bangladesh and USAID officials expressed their satisfaction and appreciation for the involvement of local stakeholders.

The United States Agency for International Development (USAID), the U.S. Government’s lead development agency, continues to work closely with its many partners to mitigate the impact of natural disasters in Bangladesh.  The USAID mission in Bangladesh funds the construction and maintenance of MPCSs throughout the country as well as wave protection walls and earthen embankments to reduce flood damage.  Since 2001, USAID, in partnership with the Government of Bangladesh, has constructed over 500 cyclone shelters in coastal areas of Bangladesh with the capacity to protect 900,000 people during severe weather.  These cyclone shelters now serve as safe havens during floods, cyclones, and other natural disasters.

The U.S. government, through USAID, has provided more than $8 billion in development assistance to Bangladesh since its independence. In 2019, USAID alone provided over $200 million to improve the lives of people in Bangladesh through programs that expand food security and economic opportunity, improve health and education, promote democratic institutions and practices, protect the environment, and increase resilience to climate change.  And, since the outbreak of COVID-19 in Bangladesh, the U.S. government, through multiple U.S. agencies, has provided over $68.7 million of assistance to support local response efforts.