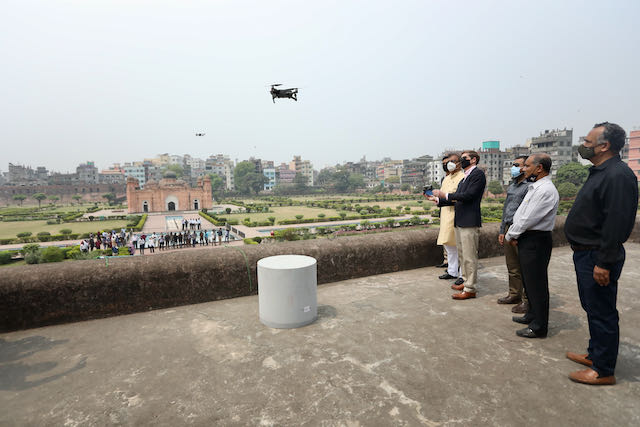 In honor of Bangladesh’s Golden Jubilee of independence, the United States is partnering with the Ministry of Culture to fund the restoration of the Mughal-era Hammam Khana at Lalbagh Fort.

DHAKA, March 24, 2021 – Today, United States Ambassador to Bangladesh Earl Miller and State Minister for Cultural Affairs K M Khalid MP officially inaugurated the U.S.-funded Lalbagh Fort cultural preservation and architectural documentation project in Old Dhaka.  The one-year initiative, funded through the U.S. government’s prestigious Ambassadors Fund for Cultural Preservation (AFCP), supports restoring the Mughal-era Hammam Khana, one of three primary structures at the Lalbagh Fort complex dating from the 17th century.  Upon completion in 2022, both levels of the Hammam Khana will reopen to the public.  Ambassador Miller and Minister Khalid launched a ceremonial photographic drone to formally initiate work on the project and toured the grounds.

The “Restoring, Retrofitting, and 3D Architectural Documentation of Historical Mughal-era Hammam Khana at Lalbagh Fort” initiative will be led by the Ministry of Culture’s Department of Archaeology, using historically authentic materials to restore architectural features and an advanced retrofitting system to improve safety and structural stability.  As part of the project, a Heritage Impact Assessment will include traditional and modern drone-based three-dimensional architectural documentation methods.

Speaking at the inauguration event Ambassador Miller said, “The Hammam Khana restoration project at the Lalbagh Fort complex is another testament to America’s partnership with the people of Bangladesh to protect their irreplaceable cultural birthright for future generations.  As Bangladesh celebrates its Golden Jubilee of independence, there’s no better time for our countries to further strengthen our friendship rooted in mutual respect and shared values.  There’s no better time to collaborate for an inclusive, peaceful, and prosperous future for Bangladesh.  And there’s no better time for us to work together to build on the legacy of sacrifice and devotion to freedom and justice both our peoples have fought to defend.  Bangladesh has had no stronger more enduring partner than America.  And America is invested in the future of Bangladesh.”

The Ambassadors Fund for Cultural Preservation, known as AFCP, is among the U.S. government’s most significant cultural initiatives abroad.  In the past 20 years, the United States has partnered with Bangladesh to support 11 AFCP projects totaling over $576,000 to preserve and restore its cultural heritage and patrimony, including restoring a 17th-century building in Shakhari Bazaar; working with Varendra Research Museum to make its collection more accessible to the public; and documenting and preserving Baul song and cultural traditions, Jamdani weaving methods, and a 2,000-year-old metal casting technique.

Ambassadors Fund for Cultural Preservation:  The U.S. Congress established the Ambassadors Fund for Cultural Preservation in 2001 to preserve a wide range of cultural heritage, including historic buildings, archaeological sites, ethnographic objects, paintings, manuscripts, and indigenous languages and other forms of traditional cultural expression.  AFCP projects may support post-disaster and post-conflict recovery, create economic opportunities, and build mutual understanding.  AFCP projects typically involve expert local partners and promote the use of traditional materials and methods.  The AFCP program reflects American values and demonstrates U.S. friendship.  Since its establishment in 2001, the United States has supported over 1,000 AFCP preservation projects in 130 countries.