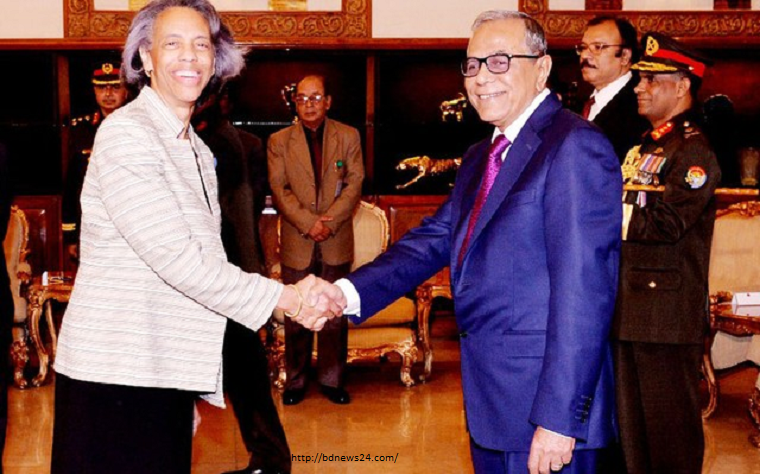 DHAKA, FEBRUARY 4 – Marcia Stephens Bloom Bernicat, Ambassador of the United States of America to the People’s Republic of Bangladesh, presented her credentials to His Excellency President Md. Abdul Hamid at a ceremony in Dhaka on February 4, 2015.

Ambassador Bernicat conveyed to President Hamid her intention to promote a Bangladesh that is secure and tolerant, moving toward its goal of middle-income status,  prepared to adapt to climate change and respond to other natural disasters, and supporting a population that enjoys good health and ample educational opportunities.   In addition, Ambassador Bernicat emphasized that a strong U.S.-Bangladesh relationship is in the interests of the United States and the American people, Bangladesh and the Bangladeshi people, as well as the regional and global community.

“We look to Bangladesh as an important partner in the region, and we know that the people of both countries benefit when we work together, as we do on so many issues,” she said at the Presidential Palace.

Ambassador Marcia Stephens Bloom Bernicat arrived in Dhaka on January 25, 2015.  A career member of the Senior Foreign Service, class of Minister-Counselor, Ambassador Bernicat most recently served as Deputy Assistant Secretary in the Bureau of Human Resources at the Department of State, a position she held since 2012.  Prior to that assignment, she was Ambassador to Senegal and Guinea-Bissau (2008-2011).  Ambassador Bernicat also has extensive experience in South Asia, having served as Office Director for India, Nepal, Sri Lanka, Maldives and Bhutan in the Bureau of South Asian Affairs at the Department of State (2006-2008) and as the Deputy Political Counselor at the U.S. Embassy in New Delhi, India (1992-1995).