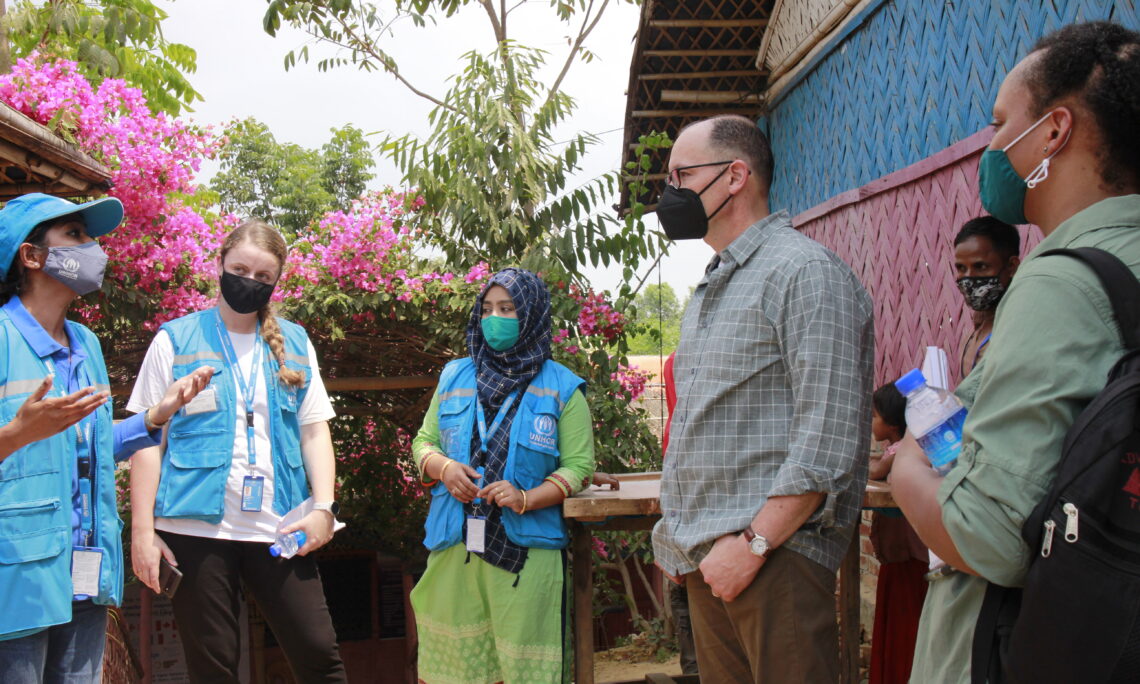 Announcement follows the first visit to the Rohingya camps since the U.S. Secretary of State’s determination that members of the Burmese military committed genocide.

“This brings the total we’ve provided since August 2017 to $1.7 billion,” said Ambassador Haas.  “Of this new funding, $125 million is for programs inside Bangladesh — for Rohingya refugees and affected Bangladeshi communities.”

“I am heartened by the strong collaborative relationship with humanitarian agencies working in the camps and host communities in Cox’s Bazar,” Ambassador Haas said.

The Ambassador’s trip was the first visit since U.S. Secretary of State Antony Blinken announced on March 21 he had determined that members of the Burmese military had committed genocide and crimes against humanity against the Rohingya.

While in Cox’s Bazar, Ambassador Haas visited Refugee Relief and Repatriation Commission (RRRC) Commissioner Shah Rezwan Hayat and Deputy Commissioner and District Magistrate Md. Mamunur Rashid.  The ambassador expressed appreciation for the resumption of regular activities in the camps, particularly that learning centers were open again, providing education and ensuring that Rohingya do not lose a generation to learning.

Ambassador Haas also saw volunteer fire fighters using newly developed U.S. Agency for International Development (USAID) mobile fire units equipped with backpacks with pumps and transport capacities during a fire-containment training demonstration.  The USAID project is producing and delivering 450 mobile fire units and 3,000 20-liter firefighting backpacks to the camps and will train 3,000 refugee volunteer firefighters to use and maintain the equipment, helping to prevent and respond to fires.  This project will be expanded to all camps by 2023.

He also visited a field lab, a healthcare center accessible to members of the host community, and a liquified petroleum gas distribution center that reduces the need to collect for firewood for fuel, reduces pressure on local forests, and protects women and girls at risk of gender-based violence while collecting wood.