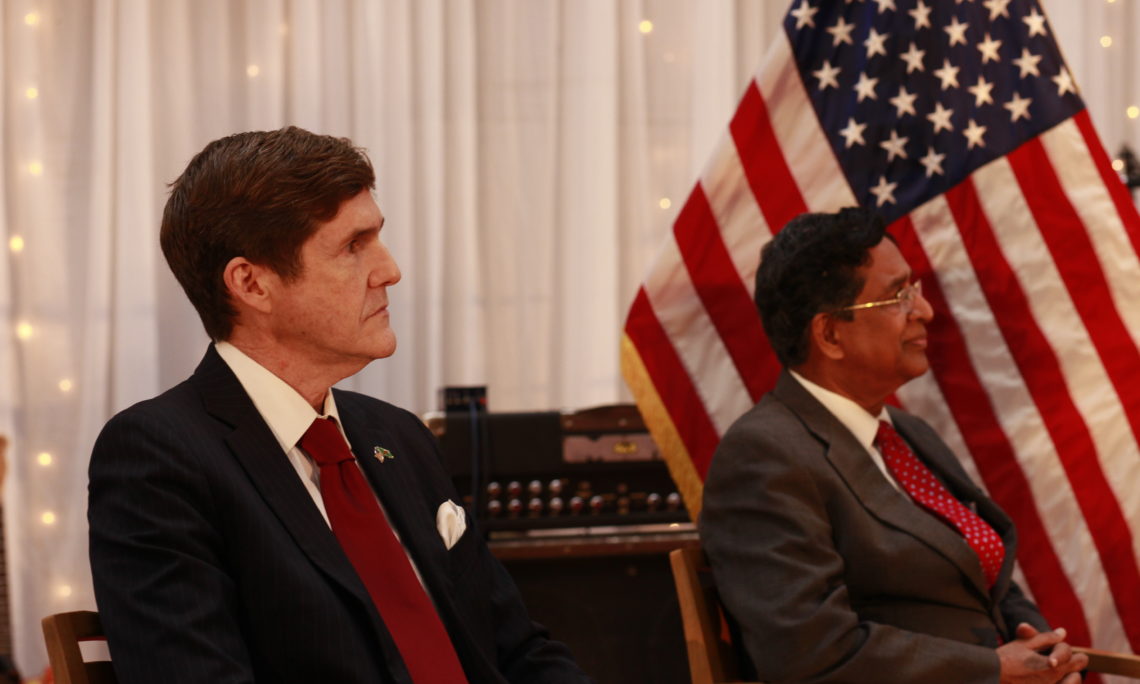 DHAKA, July 4 – Today marks the 243rd celebration of U.S. Independence.  Ambassador to Bangladesh Earl R. Miller and the U.S. Embassy in Dhaka celebrated the occasion July 3 with a National Day event.  The Honorable Minister of Agriculture Abdur Razzaque attended the event as the chief guest and representative of the Government of Bangladesh.  Ambassador Miller opened the ceremony with the following remarks, as prepared for delivery:

Thomas Jefferson said he enjoyed celebrating America’s birthday more than his own.  The older I get, the more I share that sentiment.

Honorable Minster of Agriculture, Dr. Mohammed Abdur Razzaque; esteemed government officials; colleagues from the diplomatic corps; friends:  Welcome to the U.S. Embassy’s celebration of the 243nd birthday of the United States of America.

I’m happy to be celebrating my first U.S. national day in Bangladesh.  Thank you to the U.S. Embassy community, our generous sponsors, everyone who helped organize and support this year’s celebration.

As a former Marine, it warns my barnacled heart to see our Marine Corps Security Guards’   flawless presentation of the colors.  You make us proud.  Semper Fi, Devil Dogs.

There is nowhere I would rather celebrate my country’s Independence Day and founding principles than in this remarkable nation.  Bangladesh is one of the United States’ most valued partners and one of the world’s great development success stories.

I am proud of what our two countries are achieving together.  American commercial aircraft now hoist the green and red into skies across the world.  American companies produce more than half of Bangladesh’s natural gas, build power plants, supply locomotives, and train thousands of Bangladeshi workers to the highest international standards.  Two-way trade between the United States and Bangladesh totaled $8.2 billion last year, double what it was only a few years ago.

Our security and military relationship has never been stronger.  The United States is the leading contributor of humanitarian assistance to the Rohingya crisis, providing more than $541 million since August 2017.  The United States salutes the people of Bangladesh for opening their borders and hearts to over one million persecuted Rohingya.

And, most importantly, our people to people ties remain the heart of our enduring support for one another.  There are over 200,000 Bangladeshis in America.  7,500 Bangladeshi students study on American college campuses each year.  Senator Edward Kennedy said at Dhaka University in 1972, “the real foreign policy of America is citizen to citizen, friend to friend, people to people, foreign bonds of brotherhood that no tyranny can diminish.  For in a sense, we are all Bengali, we are all Americans, and we all share the great alliance of humanity.”

The American poet Walt Whitman wrote, “I take to the open road, healthy, free, the world before me”

One of the stops on today’s road show is my favorite American city:  Detroit.  The Motor City.  Motown.

A young man named Berry Gordy worked the assembly line in Detroit at the Lincoln-Mercury automobile plant.  In 1959, he decided to become one of the first Africa Americans to own a record label he named Motown.  He borrowed $800 from his family and started recording music out of his Detroit apartment.  And soon, he bought a house to record from that became home to some of the most popular musicians in the country: Smokey Robinson and the Miracles, the Temptations, Martha Reeves and the Vandellas, Diana Ross and the Supremes, Michael Jackson and the Jackson Five, the Four Tops, Gladys Knight, Stevie Wonder, Marvin Gaye, Lionel Richie and the Commodores.

You need to visit the Motown Museum on West Grand Boulevard in Detroit.  There is nothing grand about it.  Its two modest houses next to each other.  One was the publishing house.  The other was the Gordy family home with the garage converted into a recording studio and the kitchen into a control room.  You can stand in the converted garage that once had a big car door  and dirt floor where all the hits were created, stand on the same spot where Smokey and Michael and Diana and Marvin did their thing.  It is wonderfully simple and simply wonderful.

And that simple house soon had a sign out front that read Hitsville, USA.  180 Number One hit songs.  And as Motown grew and changed so did America.  It was the time of King and Kennedy.  Of marches and rallies and groundbreaking civil rights laws.  And Motown’s music was more than a soundtrack.  It was a heartbeat.

As one of the Four Tops said, “Back in the ‘60s, when we weren’t allowed to go certain places, our music crept into people’s homes… into their living rooms, their kitchens, their cars.”

Motown helped people look at one another a little differently, because something changed when little girls across the country saw Diana Ross, who grew up in a Detroit housing project, on the Ed Sullivan Show.

Something happened when teenagers turned up the volume on a Temptations song, no matter where they lived, in Birmingham or Boston, Mississippi or Michigan.

How apt we celebrate with Motown music, once called “The sound of Young America.”  Celebrate with joy and pride and humility America’s improbable experiment in democracy and undimmed promise of a better future for all.

Dr. Martin Luther King said in 1965, “The American dream reminds us – and we should think about it anew on this Independence Day – every man is heir of the legacy of dignity and worth.”

The story of America is our striving, imperfect and ongoing, to live up to our founding ideals, to understand our country’s meaning, its promise and possibilities.  A struggle Dr. King and so many others gave their lives for, to live up to words that made the United States a beacon, inspiring people with ideals that still light the world:  “We hold these truths to be self-evident, that all men are created equal, that they are endowed by their Creator with certain inalienable rights; that among these are life, liberty, and the pursuit of happiness.”

It is the singular honor of my life to be the United States Ambassador to Bangladesh.  How lucky I am.  Everywhere I travel, I meet courtesy and graciousness I think unique to this special country.  How fortunate to be your privileged guest.  Thank you for being ours this evening.

And let’s have some fun this evening.  This is a birthday party, after all.  We’re healthy, free, and the world is before us.

On behalf of the United States of America, I salute the Honorable Prime Minister Sheik Hasina and the people of the great nation of Bangladesh.