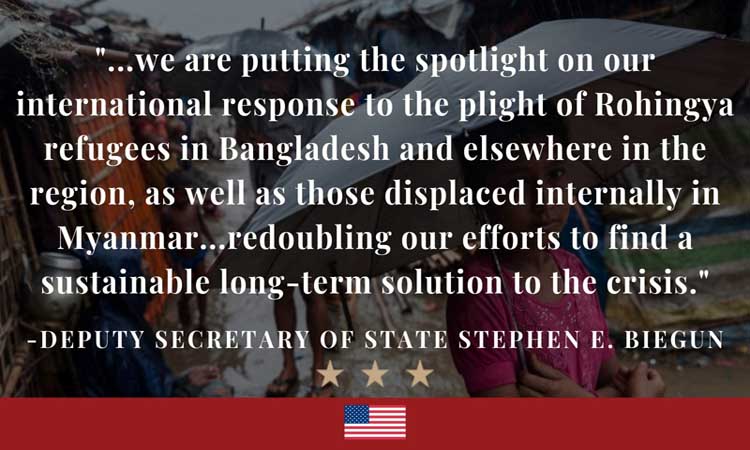 U.S. DEPARTMENT OF STATE
Office of the Spokesperson
For Immediate Release
October 22, 2020

Thank you, Acting Assistant Secretary O’Connell, and thank you for the kind introduction and for your incredible leadership here in the United States, especially in the Rohingya response.  I would also like to thank my co-hosts Minister of State Ahmad, Commissioner Lenarcic, High Commissioner Grandi, and all the participants joining us today for your continued support to address this ongoing crisis. Thank you as well to Under-Secretary General and Emergency Relief Coordinator Lowcock for the partnership we share with UN Office for the Coordination of Humanitarian Affairs, and to Foreign Secretary Momen and the Government of Bangladesh – it’s wonderful to see you again, Sir – for your incredible generosity and continued support in hosting nearly one million Rohingya refugees.  I am also pleased to be joined later today by my colleague, Acting Administrator for the United States Agency for International Development John Barsa. John is going to discuss our government’s engagement with partner countries in addressing this humanitarian crisis.

It is an honor to join all of you today as we work together to sustain support for Rohingya refugees.  For the United States, this is an area of strong bipartisan support and reflects our nation’s decades-long dedication to resolving humanitarian crises and finding sustainable, dignified solutions.  Last month, I hosted a dialogue with the world’s top ten humanitarian assistance donors to commemorate the 75th anniversary of the United Nations.  At that event, we discussed how we could work together to best respond to the world’s most pressing humanitarian needs by leveraging our existing partnerships and forging new ones in order to alleviate the suffering of the world’s most vulnerable people.

Today’s conference represents an important opportunity for all of us to deliver on those discussions.  As leaders, we are putting the spotlight on our international response to the plight of the Rohingya refugees in Bangladesh and elsewhere in the region, as well as those displaced internally in Myanmar.  It’s critical for us to address these vulnerable populations’ needs while redoubling our efforts to find a sustainable long-term solution to the crisis.

August 2020 marked the third anniversary of the mass displacement of Rohingya fleeing from violence and ethnic cleansing in Myanmar’s Rakhine State.  As a direct result of years of violence and discrimination, there are currently 860,000 Rohingya refugees registered by UNHCR in camps in Cox’s Bazar, making it the world’s largest refugee settlement.  I had the opportunity last week to discuss this very challenge with the Government of Bangladesh in Dhaka and expressed my government’s deep gratitude to the people of Bangladesh for their generosity.  We also want to thank the other countries in the region that host an additional 150,000 Rohingya refugees.  Beyond that, we cannot forget that an estimated 600,000 Rohingya remain in Myanmar, including over 130,000 internally displaced people who have been confined to camps in Rakhine State since 2012.

The United States and our international partners remain committed to working with Bangladesh to resolve this crisis.  During my visit to Bangladesh, I reaffirmed the United States government’s efforts with all parties to create conditions conducive to the voluntary, safe, dignified, and sustainable return of Rohingya to their homes in Myanmar.  We recognize that the primary responsibility for creating these conditions rests with Myanmar and we will demand this of the government in Naypyitaw.

I also want to recognize the significant contributions of other regional partners and encourage your continued responsiveness to the needs of Rohingya refugees.  Together, we are seeking to develop a creative, multi-pronged approach that will successfully resolve this humanitarian crisis, in full adherence with international humanitarian standards, and avoiding unilateral measures.  I look forward to hearing your proposals today and in the coming weeks and months and to talk about what we can do together to advance a peaceful resolution to this crisis.

Indonesia’s recent humanitarian actions to offer safe harbor to Rohingya refugees serves as an exemplar for the region and beyond.  My staff shared the story of an Indonesian fisherman who waded out to sea and rescued stranded Rohingya women and children.  These actions are testaments to the human and moral imperative we all have in helping resolve this crisis.

The government of Myanmar’s actions are essential to the long-term goal of enabling Rohingya refugees to return home.  As a first step, Myanmar must grant unhindered and sustained humanitarian access to affected communities – we will continue to be a partner with you in this effort.  Further, more must be done to address the root causes of conflict in the Rakhine State – decades of violence have benefited no one.

The United States is ready to join each of you to stop this decades-long cycle of violence in Rakhine State, including by cooperating to end the trafficking of weapons and narcotics that have enabled the State’s violence and instability for far too long.  In particular, P5 members of the UN Security Council have a special obligation to contribute to ending conflict and aiding the victims of violence.

On behalf of the United States, I am proud to announce that the United States is providing an additional $200 million in humanitarian assistance for the Rohingya refugee response in 2020.  Combined with the funding that we have announced previously, our total 2020 contribution  will be more than $437 million, bringing the U.S. total contribution since August 2017 to nearly $1.2 billion in countries including Myanmar, Bangladesh, Malaysia, Indonesia, Thailand, and India.

So, let me close by emphasizing our deep appreciation for all of you for your strong and vital partnership in working together to solve this crisis.  For those members of the Rohingya community who join us today, please know that we stand with you and we will work with you.  We will hold accountable those responsible for the horrific abuses that have occurred, and we will work with you to shape policies that reflect your community’s decisions about your future.