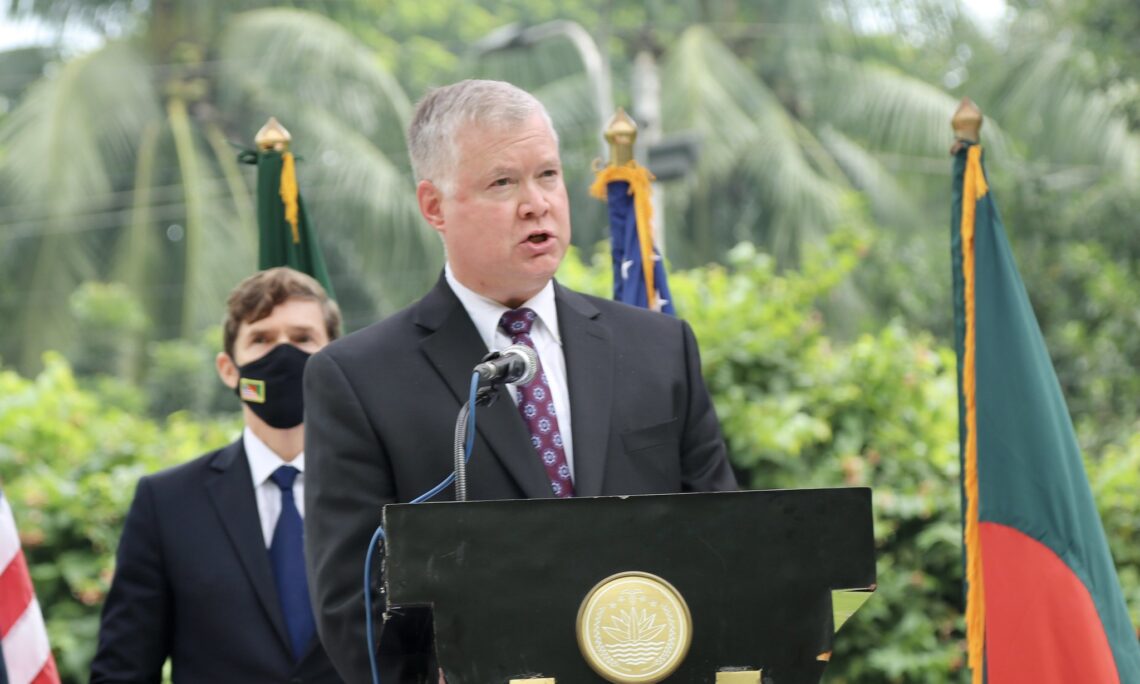 DepSec Biegun:  Thank you very much Foreign Minister Momen.  It is a great pleasure to be here this afternoon with you and with your team.

It is my first visit to Bangladesh, but I have to say that this is a country that for me, like for many Americans, has been one of great interest and even great fascination for most of our lives.  I am pleased to be here to celebrate yet the latest chapter of cooperation between the United States and Bangladesh, a relationship that dates back many decades and has bound the Bangladeshi people and the American people most closely together over these many years.

The Foreign Minister and I, as he said, had a very productive meeting today over the course of almost two hours of discussion.  I also had a lengthy meeting yesterday evening with members of the Foreign Minister’s team where we discussed in even greater depth the number of these issues of current and future cooperation.

The United States sees Bangladesh as a key partner in the Indo-Pacific region and we’re committed to growing our partnership in this regard to advance a free and open Indo-Pacific.  Bangladesh will be a centerpiece of our work in the region.

We discussed our invaluable cooperation in combating COVID-19, the impressive results that the government here in Bangladesh has achieved, and our work together on producing and rolling out important protective equipment and also medicines in the near future, ultimately with the hope of close coordination and cooperation on the distribution of vaccines once one is found to be safe and reliable.

The United States looks forward to Bangladesh participating in the upcoming Indo-Pacific Business Forum, an opportunity for us to continue our discussions on economic cooperation on a bilateral and multilateral basis.  We know that Bangladesh places a strong emphasis on the importance of private sector led growth.  We have each appointed a representative to lead our governments’ engagement.  The Honorable Prime Minister’s representative, Mr. Rahman, and also in the United States of America our Under Secretary for Economics Keith Krach.  Together they have started a process of developing a work plan that as we execute it will only deepen our economic relationship between the United States and Bangladesh.

In the course of our meeting I was pleased to confirm to the Foreign Minister that the United States has now granted all approvals for the establishment of a new Bangladeshi Consulate in the city of Miami in the United States of America, and we look forward to broadening the official diplomatic presence of our Bangladeshi friends to serve the interests of Americans and the large Bangladeshi American community which is a robust part of American society.

Although the pandemic has slowed travel and created obstacles to the normal operations of our embassies as the Foreign Minister said we are looking very much forward to being able to resume operations sufficient to process the visas of students who would like to return to the universities in the United States.  Of course, the course of this pandemic will largely dictate the ability of our students, of our countries, of our universities to be able to move forward in that regard.  But I’m quite confident that there will be no obstacles to moving forward with this work after the completion of the treatment of the vaccine.

Finally, I want to say that we very much discussed the challenges of a large refugee population here in Bangladesh at Cox’s Bazar.  How we can work together not only to meet the needs of that population, but also to address the underlying issues so that we can get  a permanent solution so that the government of Bangladesh and the people of Bangladesh do not permanently have to carry the weight of this on their own shoulders.  The United States, of course, has been a very supportive partner.  We will be raising a substantial amount of additional humanitarian assistance together as we seek to work for a more permanent solution to the resolution of that crisis.

With that, again I want to personally thank you, Foreign Minister.  You’ve been a delightful host and I very much appreciate the warm welcome that I received to Dhaka here today and I look forward to answering questions with you regarding the interests of your media.  Thank you.

Question from Mr. Mainul Islam, Ittefaq:  Good morning, sir. I have two issues.  One is the repatriation, about the repatriation of Rohingya refugees.  How will the U.S. act specifically to make Myanmar forced to take the Rohingyas back?  After the election you have mentioned about the November 8 election.  In other words, what is the specific development on deportation of Mr. Rashed Chowdhury?  Can you advise us on the situation?

DepSec Biegun:  Thank you for the questions.  In regard to the refugee population, the Rohingya refugee population, I think it’s well known that the United States has been quite outspoken and used its political influence as much as possible to influence decisions inside Myanmar regarding the treatment and restoration of rights of these people.  But I also want to emphasize that this requires a regional and a global response.  All countries need to work together shoulder to shoulder.

Of course, this is not simply the responsibility of the government of Bangladesh, as generous as that government has been.  This is a global priority and one that every major country in the Indo-Pacific should be speaking with equal outspokenness to the government of Myanmar to take the steps necessary to ease this crisis.

As far as the legal matters that are continuing to be reviewed in the United States of America, I should point out at the top that those matters are beyond the reach of the Department of State as they are most properly dealt with by our authorities in our legal institutions.  I do know, and as we’ve discussed with the Minister, that those matters are under review although I can’t update you on the current state of affairs as it’s not within my department’s jurisdiction.  I will say this morning I had a chance to visit the childhood home of the Honorable Prime Minister where the tragic events happened in 1975.  It’s deeply moving for me and for all Americans and it was yet another impression of the severe nature of that moment and how important it is to your people.  So, thank you.

Question from Mr. Shahidul Islam Chowdhury, New Age:  The State Department has just announced an initiative with UK, EU, and the UN High Commission of Refugees on Rohingya issues.  How is this initiative any different from existing joint response plan?

DepSec Biegun:  The announcement that was just made regarding a donor’s conference is going to seek to ensure that sufficient resources are available from the international community to address the immediate humanitarian needs of the refugee population that’s currently here in Bangladesh.  But again, I want to emphasize that we do not see that as a long-term solution to this crisis.

We very much agree with the government of Bangladesh that a solution needs to be found to restore the rights and right of return of people who are currently in the refugee camps here in Bangladesh.  We have to meet their immediate humanitarian needs, but we also have to redouble our efforts in the international community to reach a long-term solution.

Question from Mir Mustafizur Rahman, Financial Express :  My question is about Indo-Pacific Strategy.  We are eager to have some foreign investment or infrastructure investment from the U.S.  What is your position in this regard?

DepSec Biegun:  The United States already is a significant investor here in Bangladesh so we’re building off of an excellent foundation.  While I do agree with the Foreign Minister that the geographic location of Bangladesh makes it an attractive partner, I want to be very quick to emphasize that what’s most attracting the attention of the outside world to Bangladesh is the long period of stability and economic growth that we’ve seen happening under this government.  The United States is comprised of both an official and an unofficial sector and I can say that what we’ve heard from our business community is an increasing statement of interest in Bangladesh because of the size of your consumer class, because of skilled labor, because of your presence in the Bay of Bengal.  There are many good reasons that are drivers of the convergence of our interests here.

As far as how that manifests itself in terms of specific investments, we’ve got investors interested in a number of areas of cooperation and work here including in the energy sector, in the ITC sector and others.  Pharmaceuticals are a growing interest.  So even beyond the traditional ready manufactured garment sector, there’s deepening interest by United States investors.

The working group that we’ve set up between Under Secretary Krach and Mr. Salman Rahman should very much give us a road map that we can execute on in order to make sure that our discussions at the governmental level translate into decisions with the private sector.  I’m confident as we continue on the current course, that that will very much be the case.

Moderator:  The Secretary has to go because he has time constraints.