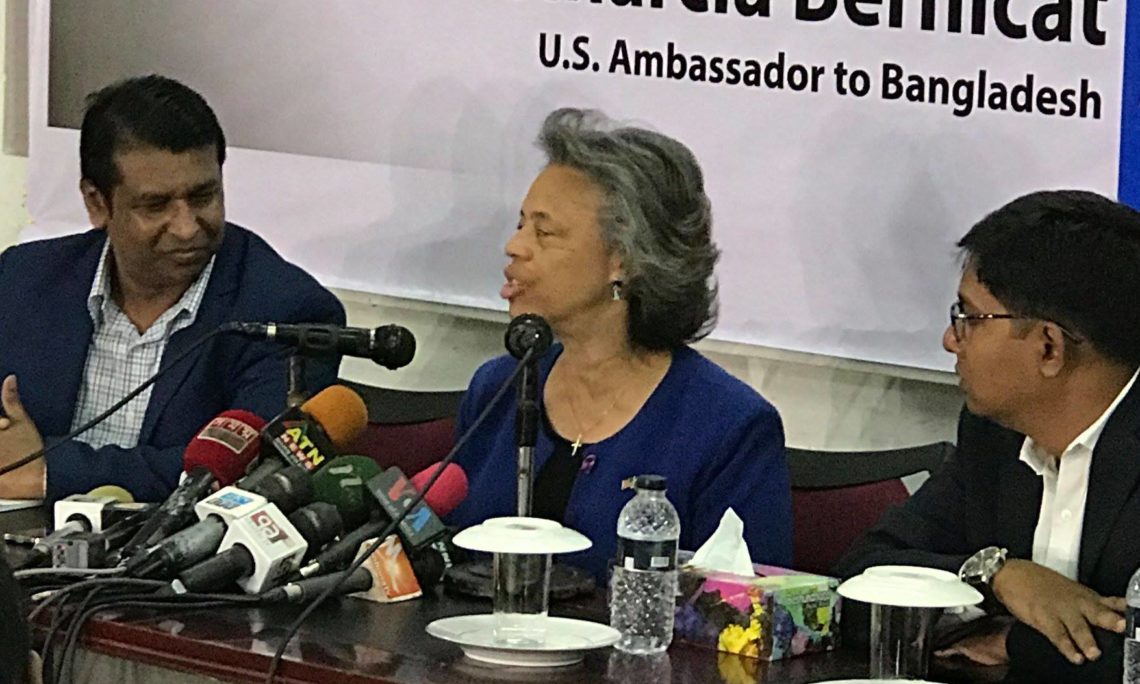 Thank you for your invitation to address this prestigious assembly. It has been nearly three years since I had the pleasure of having a frank discussion with you on opportunities and challenges we face in our robust U.S.-Bangladesh partnership.

Before taking your questions, I want to highlight a few key areas where our partnership is making a difference in the lives of everyday Bangladeshis as the country continues its journey to middle income status.  The U.S. approaches Bangladesh as our full-fledged partner, whether we are collaborating on development, democracy, security, or economic issues.

We will continue to support Bangladesh as it tackles the new Sustainable Development Goals recently adopted at the UN General Assembly Meeting in New York.  Our development partnership predates Bangladeshis independence in 1971 and has been exceptionally fruitful, producing tangible results that both the United States and Bangladesh can point to with pride.

Bangladesh has made impressive gains in many key development indicators, in fact more than any other country in recorded human history. Bangladesh’s success in reducing maternal and child mortality has been one of its most outstanding achievements.  Both maternal and infant mortality have been reduced by more than 60 percent.  Agriculture is another area of huge success.  Rice production has virtually tripled and there have been tremendous advances in the use of science and technology to increase both productivity and resilience.  Our task right now is to help Bangladesh sustain its momentum and its impressive development trajectory, as we work toward achieving the SDGs while leaving no one behind.

But of course, there is still much to be done.  To continue its growth as a democracy, Bangladesh needs a political environment that fosters tolerance, promotes human rights, and supports a democratic process that allows all citizens to have a strong, peaceful voice in their own future.  Freedom of expression, vibrant media, right to peaceful assembly including demonstrations, and free, fair, participatory, and credible elections are vital for continuous and stable growth for Bangladesh.  There’s no tradeoff between the two.

So while we commend the holding of the Khulna and Gazipur city corporation elections, the U.S. remains concerned by reports of alleged irregularities, including ballot box stuffing and intimidation of political players and polling agents both before and on the day of the vote, in both Khulna and more recently, in Gazipur.  We are also concerned by reports of police harassment and arrests of opposition polling agents and politicians in the weeks leading up to the elections.  The Government of Bangladesh has committed to hold free, fair, participatory, and credible elections that reflect the will of the Bangladeshi people — we look to the government to fulfill this commitment.  The United States and Bangladesh are built on the same democratic principles and foundations — this is what makes both of our countries strong.

The United States has partnered with Bangladesh to promote peace and stability in South Asia through combined training, such as the Disaster Readiness Exercise and Exchange, now led by the Bangladesh military, and Exercise Shanti Doot, a multinational peace keeping operation training that took place at the Bangladesh Institute of Peace Support Operation Training (BIPSOP). The United States Global Peace Operations Initiative is a proud supporter of BIPSOP.

Let me also underscore the vital importance of our joint efforts to address violent extremism.  As partners over the years, we have developed the resources, the commitment, and the shared experiences we need to counter terrorism and violent extremism.  The U.S. is determined to continue our work together with our partners for the safety and security of our countries.  This is a global issue that requires a coordinated, global approach.

This is especially true in Bangladesh’s energy sector, which has grown by leaps and bounds in recent years, driven in part by U.S. investment in this crucial sector.  Chevron Bangladesh is the single largest investor in Bangladesh, currently producing over 50% of this country’s natural gas.  But only 2/3 of Bangladesh is connected to the grid at present and energy consumption is estimated to continue to grow and reach 34,000 megawatts by the year 2030.  U.S. companies have the technology, the know-how, the reliability and the resources to help Bangladesh achieve its energy goals to sustain this country’s rapid economic growth.

I do see a particularly stubborn challenge here in Bangladesh — but one that this country itself has the means to remedy.  I just returned yesterday from the Sustainability Compact meeting in Brussels, the fourth in the series since the Rana Plaza tragedy in 2013, where discussions focused on the fact that little progress has been made to date, in the last couple years, to improve labor rights and ensure that they conform to international standards, specifically in the ready-made garment sector.   Sales and exports from Bangladesh in this sector have plateaued in recent years, in part I believe, because investors and buyers have begun to look for less risky sourcing countries, countries in which labor rights and labor safety are stronger.   It is Bangladesh’s own interest to make progress in these areas in order to reinvigorate this sector that has been such a vital part of Bangladesh’s impressive growth.  Regarding workers’ safety, Bangladesh has made remarkable progress in this area should take advantage of the expertise and technological knowledge that organizations such as the Alliance and Accord bring, to create a safer work environment.  Creating artificial deadlines for their departure will prevent the smoothest possible transition of the monitoring and remediation function of the safety conditions in this sector and also to standing up fully the government’s new Remediation Coordination Cell.

Finally, I want to turn to the issue that so clearly demonstrates the generosity, the humanity, the warmth and the strong sense of history of the Bangladeshi people.  Bangladesh saved the lives of more than 700,000 Rohingya who have fled ethnic cleansing in Burma since August 2017, and is working with Burma to lay the groundwork for the voluntary return to their homeland in a safe and dignified manner those who have been forcibly displaced.

The United States stands proudly with Bangladesh to support a policy of protection and accountability.  We were one of the first nations to respond to the crisis originating in Rakhine State, both to call for an end to the violence in Burma as well as to provide life-saving humanitarian assistance.  We are working with our allies and partners, including Bangladesh, to help ensure that there will be justice for the victims, and that those responsible for these heinous atrocities, and other human rights violations, will face the consequences.

Again, I want to thank all of you for inviting me here today to speak with you, and as always, I welcome your questions.