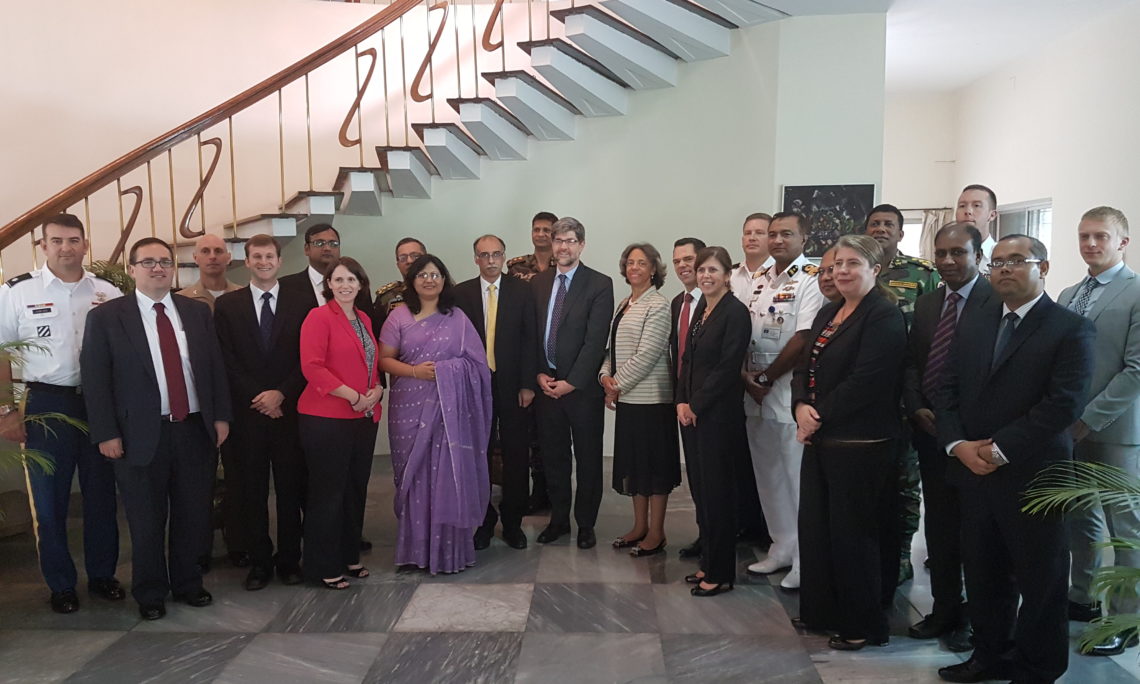 DHAKA, OCTOBER 2, 2016 — The 5th round of Bangladesh-United States Security Dialogue was held in Dhaka today. Mr. Kamrul Ahsan, Additional Foreign Secretary (Bilateral and Consular) of the Ministry of Foreign Affairs led the Bangladesh delegation comprising representatives from different Ministries and concerned Government organizations. Deputy Assistant Secretary of State Mr. William Monahan led the United States delegation that included representatives from the Departments of State and Defense. United States Ambassador to Bangladesh Marcia Bernicat and Embassy officials also attended the dialogue. Bangladesh and the United States have been holding this Dialogue regularly since April 2012.

The day-long Dialogue covered a wide range of issues related to security partnership between the two countries including, strategic priorities and regional security issues, defense cooperation, civilian security cooperation, UN peacekeeping, and counter-terrorism and countering violent extremism. Both sides agreed on the importance of a deeper and stronger partnership in addressing mutual security concerns‎ while upholding the values of human rights and fundamental freedoms.

Bangladesh and the United States recognized the shared threats they face and that countering violent extremist groups, such as ISIS / Da’esh, constitutes a global challenge. The United States delegation appreciated Bangladesh’s policy of “zero tolerance” towards terrorism and violent extremism, and not allowing its territory to be used for terrorist activities against other countries. They also applauded Bangladesh government’s efforts to control terrorist activities in the aftermath of the Holey Artisan attack by involving all relevant agencies, and the launch of a specialized Counterterrorism and Transnational Crime (CTTC) Unit under Dhaka Metropolitan Police (DMP). The United States delegation also commended Bangladesh for its contribution to international peace and security through participation in the UN peacekeeping operations and also in the Global Peace Operations Initiative, funded by the United States.

The Bangladesh delegation appreciated the United States assistance and support in further improving its disaster preparedness and response capabilities through joint Disaster Response Exercise and Exchange (DREE), construction of 600 multipurpose cyclone shelters in coastal belts, and provision of fast-moving boats to the Bangladesh Coast Guards which has minimized the response time to prevent armed robberies within its maritime boundary. The Bangladesh delegation sought for enhanced United States training, equipment, and logistics support in the areas of counterterrorism and countering violent extremism, disaster management, and the UN peacekeeping.

The Dialogue ended with a pledge to work together to build upon the current growing security cooperation between the two countries in the coming years. The 6th round of Security Dialogue will be held in Washington next year.