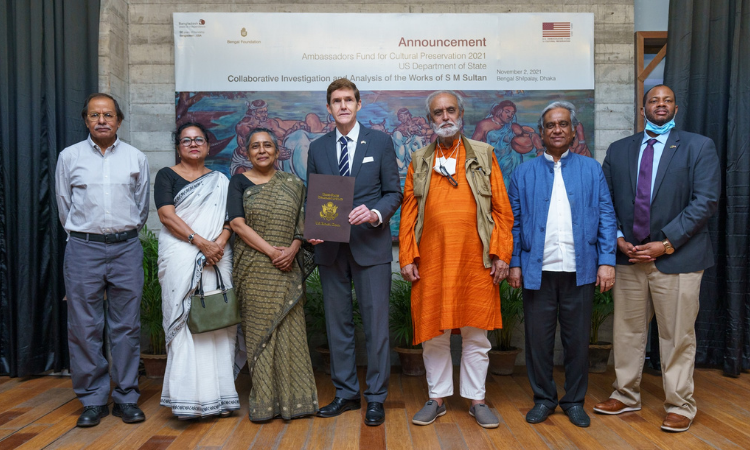 In honor of 20 years of the U.S. Ambassadors Fund for Cultural Preservation and Bangladesh’s Golden Jubilee, the United States is partnering with the Bengal Foundation to fund the study and restoration of SM Sultan’s paintings.

The AFCP is among the U.S. government’s most significant cultural initiatives abroad.  In the past 20 years, the United States has supported 12 AFCP projects totaling over $870,000 to preserve and restore Bangladeshi cultural heritage and patrimony, including restoring the 17th-century Mughal Hammam Khana in the Lalbagh Fort Complex; working with Varendra Research Museum to make its collection more accessible to the public; and documenting and preserving Baul song and cultural traditions, Jamdani weaving methods, and a 2,000-year-old metal casting technique.

The AFCP 2022 call for cultural preservation proposals is now open, with a deadline of December 1, 2021.  Information about the application process is available on the Embassy’s website (https://bd.usembassy.gov/embassy/dhaka/grants-and-procurement-opportunities/).

Ambassadors Fund for Cultural Preservation:  The U.S. Congress established the Ambassadors Fund for Cultural Preservation in 2001 to preserve a wide range of cultural heritage, including historic buildings, archaeological sites, ethnographic objects, paintings, manuscripts, and indigenous languages and other forms of traditional cultural expression.  AFCP projects support post-disaster and post-conflict recovery, create economic opportunities, and build mutual understanding and typically involve expert local partners and promote the use of traditional materials and methods.  Since its establishment in 2001, the United States has supported over 1,000 AFCP preservation projects in 130 countries reflecting American values and demonstrating U.S. friendship.