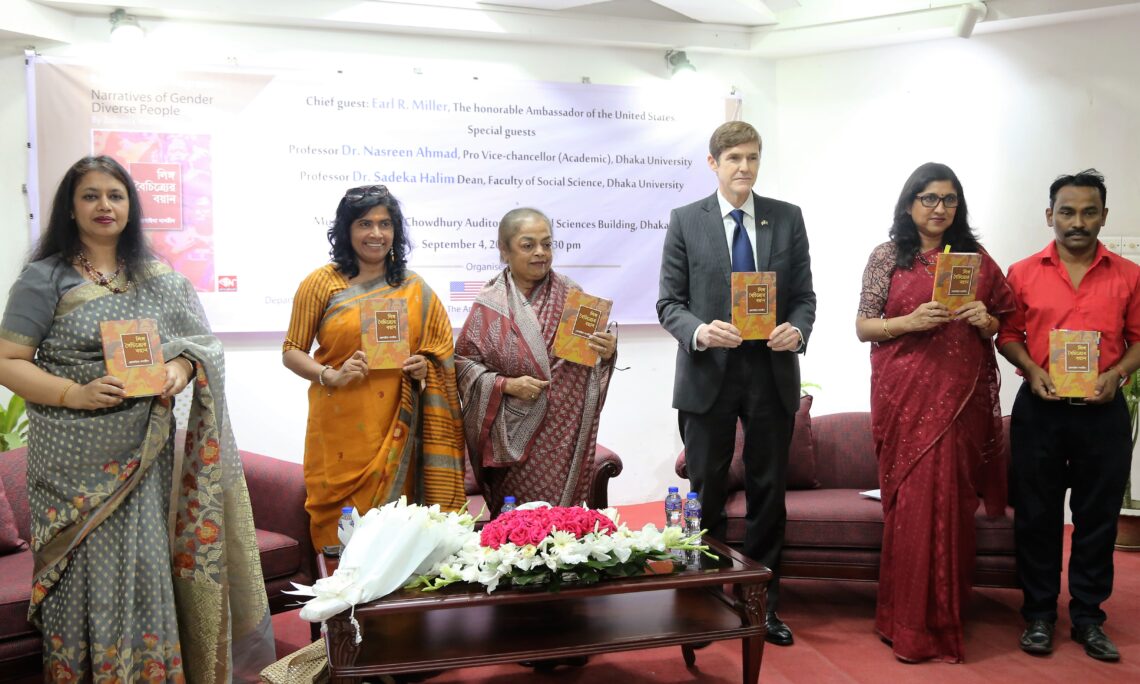 American civil rights activist James Baldwin would often say each of us needs to win the battle against our own prejudices and against moral apathy to avoid the death of the heart.

As a Fulbright Fellow alumna, recently returned from Rice University in Texas –there is a huge Bangladeshi-American community in Texas in Houston and Dallas – and, I’m really glad to see that you, Dr. Nasreen, had a chance to experience that wonderful state.  And of course you are now part of a distinguished group of Dhaka University faculty and students, who are U.S. education exchange alumni, including your Vice Chancellor and staff from the Departments of English; Fine Arts; International Relations; Law; Tourism and Hospitality Management; and Zoology and the list goes on.

I want to commend you, Dr. Nasreen, for your commitment to increasing tolerance and understanding of gender diversity and transgender people.

This year in the United States, we commemorated the 50th anniversary of what’s called the Stonewall Riots.  That’s a movement where LGBTI individuals and activists protested against police harassment and social discrimination suffered by sexual minorities.

And in that movement, there were two transgender women of color, Marsha P. Johnson and Sylvia Rivera…pioneers in the movement.  Both championed rights for all sexually diverse populations; and became part of this movement, which became a symbol of resistance to social and political discrimination, and eventually, led to progress and change in government policies and strides towards equality for the LGBTI community.  And this year, New York City – where the Stonewall Riots first occurred – will honor Marsha and Sylvia’s memory with a statue, the first permanent, public monument honoring transgender women.

As American cultural anthropologist Margaret Mead said, “Never doubt that a small group of thoughtful, committed citizens can change the world; indeed, it’s the only thing that ever has.”

I know the spirit of justice is strong in the world-changing students and faculty of Dhaka University.  Young people on this campus, after all, banded together to fight against oppression and lead the Language Movement.

But in many countries, including Bangladesh and my own, sexual- and gender-diverse individuals and their supporters continue to struggle.  In many countries they face violence, arrest, harassment, and intimidation for expressing their views and simply for being who they are.

So, if I could, let me just speak directly to the young people here today.  The future of this vulnerable and imperfect world that we all share rests in your hands.  You hear the phrase that young people are the future, right?  The future leaders of the world, but you’re actually leaders of the world now, and now is the time to step up and be courageous and follow the example of the people on this stage to express your views and fight for your principles and values you hold dear.  And remember…try to always remember the bonds that unite us, not separate us.  And you can image what those are:  our shared values, right?  Family and bonds of citizenship and community.

We all have to fight our own personal prejudices.  And if we’re honest, we know that we all have them.  We all have to reach across this gulf of suspicion and misunderstanding that can, sadly, separate people who don’t look like us or speak like us or worship like us or love differently than we do.

I think it is also important to remember the value and the critical value of allies.  Allies provide protection, support, and can help you speak up for marginalized populations who are often shunted into silence.

If you or a group you represent work on LGBTI issues and need a space to meet or gather, please contact my team at the U.S. Embassy.  We are your allies.  We may be able to help.

The U.S. LGBTI movement would not have achieved half of what it accomplished without the support of allies…straight people…people from across all spectrums of society.  And, one of my personal heroes is the American civil rights activist and author James Baldwin, who would often say, each of us have to win, again, this battle against our own prejudice in what he described as a moral apathy and what he also described as “the death of the heart.”

U.S. Embassy employee Xulhaz Mannan and his friend Mahbub Rabbi Tonoy were dedicated human rights activists.  Their murders in April 2016 remind us of the risks taken by those who fight for human rights of all populations in Bangladesh and again in this world we share.

At the Embassy, every year we honor their memory.

Dhaka University’s motto, I’m told, is “education is light.”  As recipients of a privileged and precious education, you must use that light – as Xulhaz and Mahbub did, as Marsha and Sylvia did – against the darkness of injustice and hate and intolerance.

Because as Baldwin wrote about my country, “I still believe we can do with this country something that has not been done before.  We are misled because we think of numbers.  You don’t need numbers.  You need passion.  And this is proven by the history of the world.”

So thank you for your wisdom, courage, and light, Dr. Nasreen and all the light bearers and champions here today.