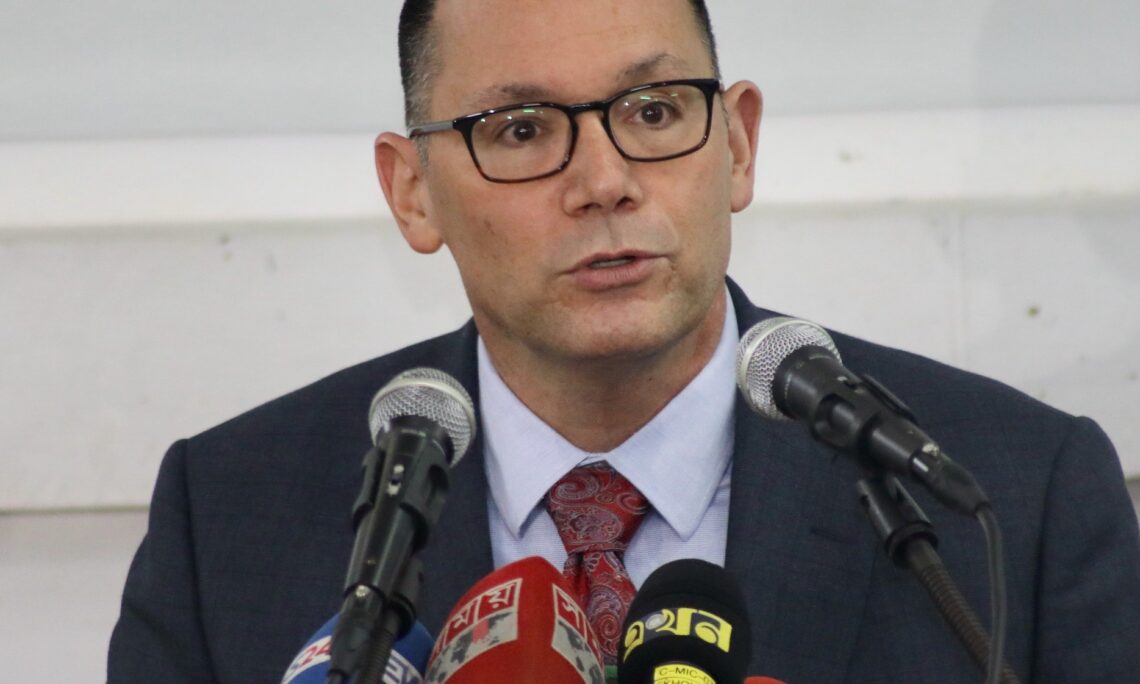 Good morning.  I had an opportunity last week to speak to a different group of editors and reporters to commemorate World Press Freedom Day. I began my remarks to them with a simple message; a message I would like to deliver to you, today:  Thank you.  Yours is a noble profession.

And increasingly, around the world, it is a difficult and dangerous one.

We see evidence of this in the news every day, and I applaud your tremendous courage.

Your role in a free society is vital, and we all have an obligation to protect the free press and to allow journalists to seek and report the truth without fear, harassment, or censorship.

I want you to know that the U.S. Embassy takes that obligation seriously and is doing what it can to fulfill it.

Again, I thank you for what you do.

I have been here in Bangladesh as U.S. Ambassador for about three months, and I am about to go on my first trip to Washington since I arrived here.

While I am there, I plan to meet with a number of U.S. government officials, congressional staffers, NGOs, and businesspeople to discuss my experiences and observations in this country so far.

What am I going to tell them?

Well, I plan to report three things when I get to Washington:

The successes of Bangladesh are real.

Just think for a moment about how far Bangladesh has come since its war for independence–from a newborn country devastated by conflict to a thriving country with one of the world’s fastest growing economies.

According to the World Bank, accounting for inflation, Bangladesh’s GDP has grown by a factor of 50 since 1972.

In that year, Bangladesh’s GDP per capita was $94 in today’s currency.

In the past 20 years, the number of people living below the national poverty line in this country has been cut in half.

That is roughly 40 million people who have risen out of poverty.

Soon, Bangladesh will graduate from Least Developed Country status, and it is steadily progressing towards becoming a middle-income country.

These accomplishments are real, tangible, and truly extraordinary.

But as real as these accomplishments are, the challenges that Bangladesh now confronts are just as real.

And they are no less daunting.

Bangladesh’s geography on a low-lying river delta, with a long coastline and large floodplains, makes it

extremely vulnerable to the effects of climate change.

When it comes to democracy and human rights, the United States has raised our concerns publicly and privately.

We are concerned about press freedom, especially the Digital Security Act, and several draft laws and regulations that could inhibit press freedom.

We are concerned about human rights abuses, including extrajudicial killings and enforced disappearances.

As I am sure you know, on December 10, 2021, Human Rights Day, the United States imposed sanctions on the Rapid Action Battalion and some of its officials based on credible evidence of serious human rights abuse.

We are also concerned about insufficient labor rights and poor working conditions in Bangladesh.

These concerns, unfortunately, cost Bangladesh access to the U.S. Generalized System of Preferences trade benefit, or GSP, in 2013.

They are also causing Bangladesh to miss out on the U.S. Development Finance Corporation, a massive source of investment capital from the United States.

Today, as you know, Bangladesh is host to nearly one million Rohingya refugees who fled a brutal genocide in Burma.

It is incumbent upon all of us to push Burma to create the conditions to allow a safe, voluntary, and dignified return of Rohingya.

In the meantime, we must all work together to ensure that the Rohingya refugees do not become a lost generation.

In addition to basic food and shelter, they need education, livelihoods, good health care, and security to prepare them for when they return to Burma.

The third thing I will say in Washington is that I believe that in the last 50 years, Bangladesh has had no better friend than the United States.  And that it will have no better friend over the next 50 years.

This year, 2022, we are celebrating the 50th anniversary of friendship between our countries.

Since 1972, the United States has provided $8 billion of assistance to Bangladesh.

We continue to invest around $200 million each year towards development programs in health, agriculture, education, democracy and governance, climate change, and providing greater economic opportunities to the Bangladeshi people.

Since the start of the COVID-19 crisis, the United States has donated nearly $140 million in COVID assistance and 64 million doses of COVID-19 vaccine to Bangladesh.

We have also supported all aspects of the national vaccination campaign, from storage and delivery, to safely administering vaccine doses.

And when it comes to security, our cooperation is deep and multifaceted.

Members of the U.S. military conduct exercises with the Bangladesh military in Bangladesh to strengthen Bangladesh defense readiness, build operational interoperability, and reinforce the partnership between our military forces.

In March, soon after I arrived, we held our eighth Bilateral Partnership Dialogue in Dhaka, which helped reinforce the big picture, strategic aspect of our relationship.

A few weeks later, Washington hosted the Bilateral Security Dialogue.  On Thursday, June 2, we will hold a High-Level Economic Consultation.

We are already moving away from a relationship based on assistance to one that emphasizes mutually beneficial trade.

I believe our greatest opportunity to deepen our relationship is in building our trade and investment relationship.

As I have often said, The United States is willing to go as fast as Bangladesh is to deepen our partnership.

We are ready to continue to work with Bangladesh and build on the progress we’ve made together in food security, health, and reducing poverty – while identifying new and innovative approaches to address issues like climate change, promoting democratic principles, and sustaining Bangladesh’s impressive economic growth.

Thank you very much.  With that opening, I would be happy to take your questions.