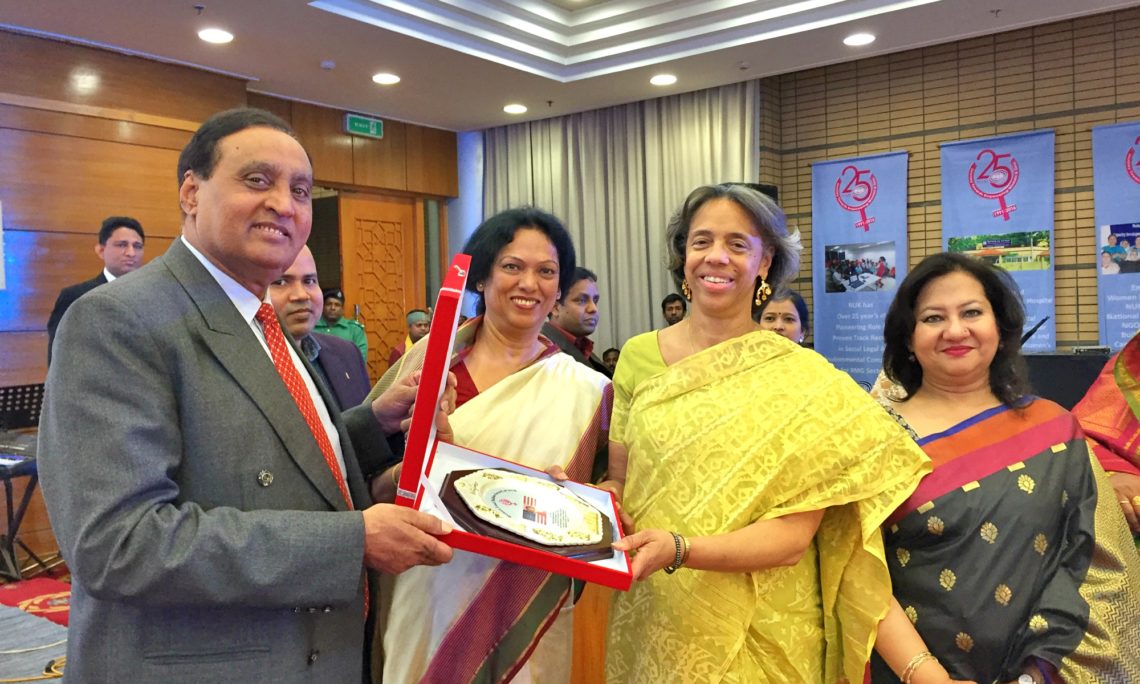 I am so pleased to be with all you this evening as we celebrate Nari Uddug Kendra’s accomplishments. For 25 years – a quarter century! – Nari Uddug Kendra has devoted itself to promoting gender equality and human rights and by fostering the personal and political empowerment of women and girls.

In response to women’s and girls’ changing needs, NUK has taken different approaches over the years. In recent years, NUK brought together workers and management to improve conditions and protect workers’ rights in the RMG sector. Another programmatic emphasis has been increasing women’s participation in the political process.

There’s one area of NUK’s work that I’ve come to know personally. Long before it was popular, NUK pioneered a novel approach to women’s empowerment: sports.   Sports help girls grow in confidence as well as athleticism. The U.S. Embassy in Dhaka has seen first-hand the benefits of this approach and we’ve had the privilege to actually support some of your work.

The partnership between our Embassy and NUK dates back to 2014, when we awarded the organization a grant to implement a project that provided self-defense/ karate training to more than 200 female students from several schools across Dhaka. As they learned self-defense techniques, they also became informed about gender-based violence, understanding why GBV happens and how the law can protect them, building the girls’ confidence, leadership skills and courage in the process.

The Embassy’s partnership with NUK continued into 2015 when we brought to Bangladesh a Women’s National Basketball Association (WNBA) star player and two-time Olympian Gold Medalist Ruthie Bolton to conduct a Sports Envoy program designed to foster empowerment among women and youth through sports. The sports envoy program reached more than 200 young basketball players and coaches from underrepresented communities through various outreach activities. One of the highlights was a four-day basketball clinic for 70 girls from rural and urban schools that participate in NUK’s programs.

I am so pleased to say that this program has had a lasting impact that’s still being felt to this day. First, some of the basketball camp participants from Dhaka schools went on to form a new Women’s National Basketball Team under the Bangladesh Basketball Federation. This is the country’s first officially recognized women’s team. Second, several basketball participants from rural schools continued playing the sport and became national and inter-district school basketball champions.

I’m proud to say that I participated in the final exhibition match, where I played the position of starting shooting guard in a five-on-five match with the program participants and Ruthie, the WNBA star. Participating in the match took me back to my undergraduate days when I played on Lafayette College’s first women’s basketball team and experienced all the joys — and agonies — of team sports.

Mostly, I remember how learning how to perform as part of a team heightened my confidence and taught me the power of working as part of an integrated whole as well as being a member my teammates could rely on. I saw the girls Nari Uddug Kendra brought together for the sports envoy program learning those same lessons right before my eyes. While shy and unsure at the beginning, a week later they were playing with all their heart, and openly expressing pride at their accomplishments.

Nari Uddug Kendra has been doing this kind of impactful work for 25 years, creating a fairer and more just Bangladesh — one girl and one woman at a time. Each of us here this evening is well aware that while much progress has been made to advance women’s rights and well-being, so much remains to be done.

Recently I had the honor of joining the Honorable Speaker of the Parliament, Dr. Shirin Sharmin Chaudhury, and my fellow Ambassadors, High Commissioners and representatives of International Organizations in Bangladesh – Ambassadors for change—during the U.N. 16 Days of Activism to end violence against women and girls. Gender-based violence is far too common and robs far too many women and girls of their lives and dignity. Too many girls are forced to marry and bear children long before they should, relegating them their children to lives of poverty, limited education and poor health. And too many women are unable to contribute to Bangladesh’s economic growth because they are denied the opportunity to continue their education, or start a business, or launch a career because social pressures make it difficult for them to balance the demands of family and career.

That is why is it essential that we continue to do all we can to support Nari Uddug Kendra and its critical work. It is a tremendous honor to join all of you in recognizing NUK’s achievements thus far, and to wish the board, staff and beneficiaries well and to encourage them as they embark on the next quarter century of promoting gender equality and advancing women’s rights in Bangladesh.

*As Prepared For Delivery