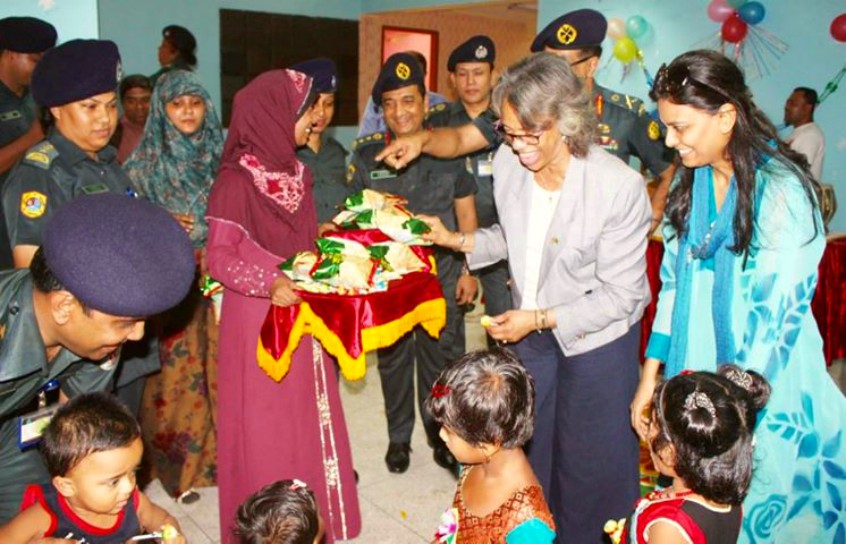 On July 27, 2017, Ambassador Bernicat became the first Ambassador to visit a prison in Bangladesh, as she spent most of the day at Kashimpur Prison.  At the invitation of Brigadier General Syed Iftekhar Uddin, the Inspector General of Prisons, Ambassador Bernicat was able to take a two hour tour of the prison’s facilities, speak as Guest of Honor at a Basic First Aid Course which was taught by American trainers, and have a working lunch with General Uddin and a number of senior prison staff.

Ambassador Bernicat was impressed with not only the facility itself, but with General Uddin’s belief that jails should be a place of vocational rehabilitation so that when inmates are released they will have the opportunity to be productive citizens and lead better lives.  This commitment to rehabilitation was evident throughout the facility as the tour proceeded as the Ambassador observed numerous vocational activities being undertaken by inmates that are skills they can easily apply when released.  Among these rehabilitation training programs were:

Additionally, the Ambassador was impressed by the women’s jail where women are allowed to have their children with them.  The prison provides a daycare center and a children’s playground.

While prisons are places where people are placed almost universally against their will, society has a responsibility to treat inmates and detainees with dignity and provide them with the tools necessary to become productive citizens upon their release, should they so choose.  There was ample evidence of such opportunities on display at Kashimpur Prison.