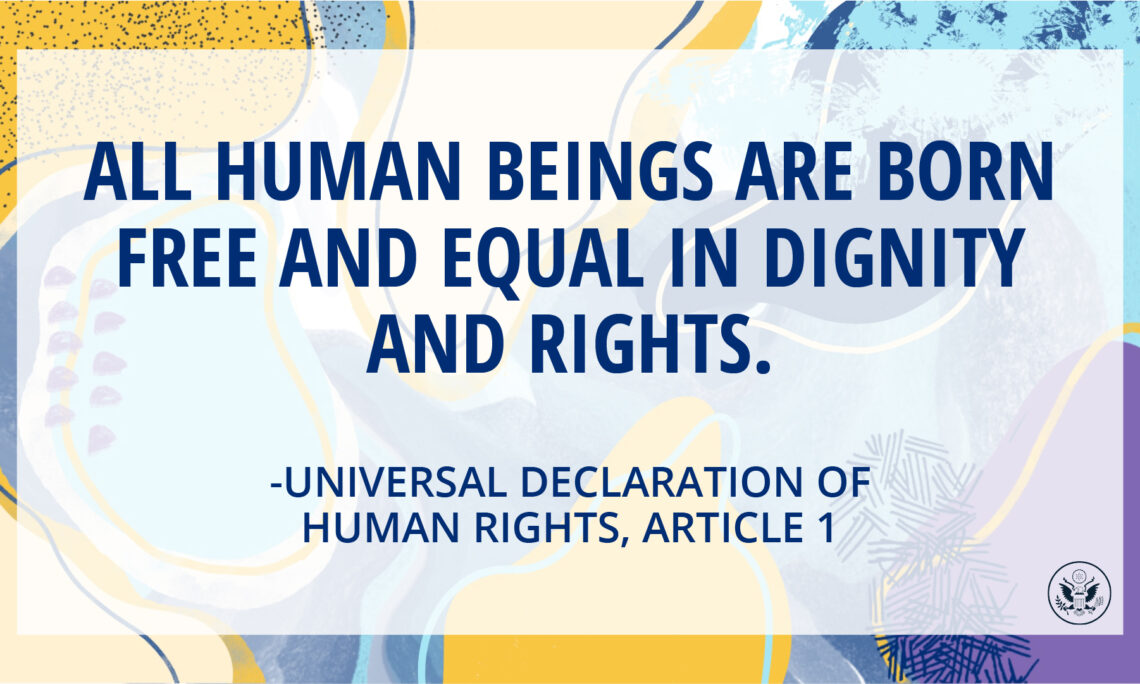 Seventy-four years ago, on the heels of the most destructive war in the history of the world, the United Nations General Assembly adopted the Universal Declaration of Human Rights (UDHR) and cemented a core principle:  human rights are universal.  People of every nationality, race, gender, disability, religion, and age are entitled to these rights.  All people, at all times, in all places.

Today, the international order created following the adoption of the UDHR is in peril.  A war of aggression threatens peace and well-being in Europe and beyond.  Autocracies undercut human rights and democratic governance.  The COVID-19 pandemic and climate change have exacerbated these challenges.  The people of the world continue to struggle for democracy, the rule of law, and respect for human rights.

I believe there is hope.  Human rights defenders, journalists, and other members of civil society are on the frontlines of this struggle to build a freer and more just world for future generations.  They work tirelessly to document abuses, advocate for government transparency and accountability, expose corruption, promote inclusion and diversity, and ensure access to justice.  Today, we celebrate their vital contributions.

In the United States, rights advocates continue to struggle to address societal inequalities.  Take for example disability rights.  In 1977, 150 persons with disabilities occupied a federal building in San Francisco.  They did so to call out discrimination and ensure equal access to jobs, transportation, and education.  This was part of a long struggle.  And thanks to their work, the United States now serves as a model for others, through innovative and transformative disability-inclusive solutions.  But the battle to ensure universal human rights in the United States continues.  Human rights activists continue to push for greater police accountability and the protection of voting rights.

I have had the great privilege to meet with brave members of civil society who are making a difference here in Bangladesh.  The United States was proud to honor three such individuals this year alone.  Rizwana Hasan, recognized by the U.S. Secretary of State in March as an International Woman of Courage, fights for environmental justice.  Tariqul Islam, named an Anti-Trafficking in Persons Hero in July, supports victims and holds traffickers to account.  And Rozina Islam, honored just yesterday as an Anti-Corruption Champion, shines a light on corruption and abuse.  On Human Rights Day, we celebrate their dedication and the inspirational work of so many others.

The voices of human rights defenders in every country are critical to hold governments to their commitments under the UDHR.  Unfortunately, these courageous individuals and their families often experience intimidation, threats, arbitrary detentions, enforced disappearances, extrajudicial killings, torture, gender-based violence, unjust charges under laws that criminalize online speech, and unfair trials.  In 2021, NGOs reported globally that over 300 human rights defenders and over 50 media workers were killed and several hundreds more were unjustly imprisoned.  Such repression is condemnable—no matter where it happens.

I also wish to acknowledge the recent political violence in Bangladesh and extend my condolences to the families of those killed and wish a speedy recovery to all those injured.  The United States is concerned about reports of intimidation and political violence in Dhaka and calls on all Bangladeshis to respect the rule of law and to refrain from violence, harassment, and intimidation.  We call upon government authorities to investigate these reports of violence and to protect the fundamental freedoms of expression, association, and peaceful assembly.

In Bangladesh, in the United States, and around the world, much work remains.  The United States will continue to support universal human rights.  We will stand in solidarity with those who seek freedom and dignity while we continue the critical work of ensuring equity and equal treatment under law at home.  We take seriously our responsibility to address our own shortcomings and do better.  We expect other countries to do the same.  The universal nature of human rights means we must hold ourselves accountable to the same standards.  Human Rights Day is a reminder that each and every one of us has the responsibility to uphold human rights.