Home হোম | News & Events | 50th Anniversary of the U.S.-Bangladesh Partnership: Looking Forward to the Next 50 Years 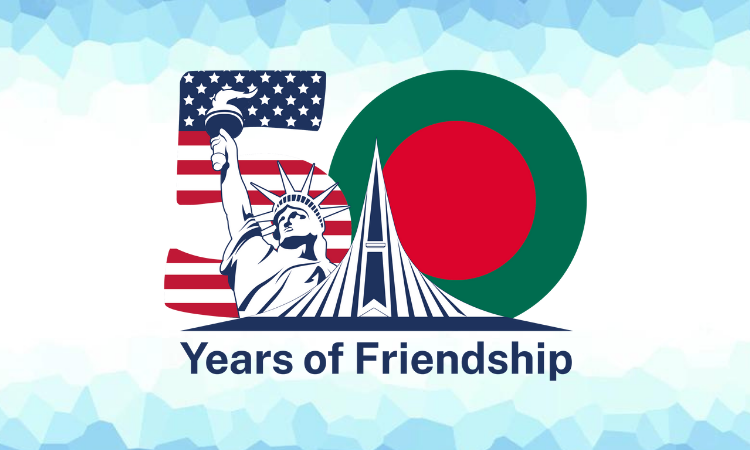 Through its remarkable first five decades of independence, I like to think that Bangladesh has found no better partner than the United States.  And we intend to build upon that partnership over the next 50 years.

Since we first clasped our hands in friendship on this date in 1972, the United States has provided more than $8 billion in development assistance.  We have partnered with the people of Bangladesh to save lives following deadly cyclones, combat terrorism and human trafficking, and help people lead healthier and more prosperous lives.  Most recently, the United States provided more than 61 million COVID-19 vaccines to assist your efforts to combat this pandemic.  Bangladesh is the largest recipient of U.S.-donated vaccines worldwide.  That is what friends do.

Bangladesh’s transformation over the past 50 years has been stunning.  When it emerged from the dark days of its Liberation War as an independent, sovereign nation, its economy was shattered, its infrastructure destroyed, and countless of its best minds had been murdered.  Many thought Bangladesh would never be able to thrive on its own.  Many thought Bangladesh would be forever dependent on the assistance of others.

Those days are long gone.  Today, Bangladesh is widely admired as a success story.  Thanks to the drive, resourcefulness, and innovation of the Bangladeshi people, Bangladesh has made rapid improvements in health and literacy, has achieved 100 percent electrification, and is home to one of the world’s fastest growing economies.  Indeed, Bangladesh will soon graduate into middle-income status, a remarkable accomplishment.

Bangladesh now lends a helping hand to its neighbors.  For example, Bangladesh stepped in to support Sri Lanka during its cash crisis and provided COVID assistance to the Maldives.  As the largest contributor of UN peacekeeping forces, Bangladesh plays a critical role in ensuring peace around the globe.  And Bangladesh, as one of the world’s most vulnerable nations to the effects of climate change, has emerged as a powerful voice in urging major emitting countries to reduce their greenhouse gas emissions.  It is also a powerful voice in calling for financing for climate adaptation.

Our two countries are peers.  While development assistance is still important, our economic relationship is increasingly about trade, not aid.  The benefits are mutual – the United States is Bangladesh’s largest export destination, and more and more American corporations now identify Bangladesh among their most important trade and investment partners.

Our people-to-people ties go back before Independence.  In 1952, Dr. Fazlur Rahman Khan was the first Bangladeshi Fulbright scholarship recipient.  He went on to receive his doctoral degree from the University of Illinois at Urbana-Champaign.  His vision shaped architecture around the world, starting in my home state of Illinois.  In Chicago, the Willis tower and the John Hancock Center stand as a testament to our two people’s long relationship.  Similarly, the banyan tree planted at Dhaka University by Senator Edward Kennedy also symbolizes our close friendship.

The United States and Bangladesh have a common historical experience.  Both of our countries fought bloody wars for independence, united by a fervent belief in democracy.  And both of our countries have learned that democracy is a process, not an end state.  In the United States we have witnessed unspeakable acts of violence and racism.  Americans are confronting these issues openly, honestly, and sometimes noisily in an effort to hold people accountable and to effect real change.  Many in Bangladesh are doing the same, and we applaud their courage.

The United States and the people of Bangladesh want the same things:  a vibrant, secure, and prosperous democracy, an accountable judicial system, and basic human rights for everyone.  Bangladesh can count on our partnership for decades to come to accomplish these shared goals.