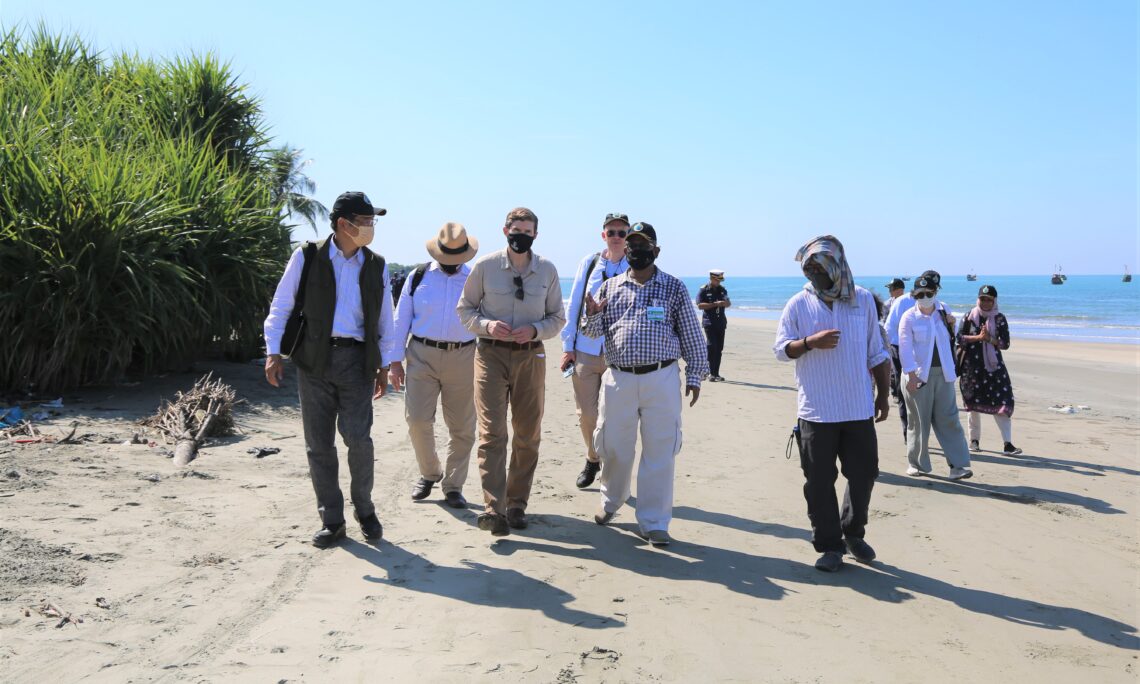 January 5, 2022 – Prime Minister Sheikh Hasina has called the climate crisis exactly what it is: A planetary emergency. In 2022, the United States and Bangladesh will continue to combat climate change together.

President Biden vowed the United States will lead the world in fighting climate change and put forth bold steps to reduce emissions and create economic opportunity, at home and abroad. During the 26th Conference of the Parties (COP26) of the UN Framework Convention on Climate Change in Glasgow in November, the United States kept the 1.5° Celsius limit on global warming within reach. We helped reach consensus with the “Glasgow Climate Pact,” and with our global partners, completed the rules needed to achieve goals outlined in the Paris Agreement.

As part of its climate leadership, the United States supports Bangladesh with innovative climate-smart programs focusing on mitigation, adaptation, and finance. At the World Leaders’ Summit in Glasgow, President Biden announced three new US initiatives that significantly impact Bangladesh.

First, the President’s Emergency Plan for Adaptation and Resilience (PREPARE) is a whole-of-government initiative to support developing countries and communities in vulnerable situations around the world in their efforts to adapt to and manage the impacts of climate change.

Second, the Agriculture Innovation Mission for Climate (AIM4C), a joint US-United Arab Emirates initiative, will increase investment in climate-smart agriculture and food systems. Bangladesh has already signed on to AIM4C and committed more than $10 million over the next five years toward agriculture research and development in support of climate action.

The third is the Plan to Conserve Global Forests as critical carbon sinks. This plan — the first of its kind for the US government — outlines how the United States will help protect rainforests and other vital ecosystems worldwide that capture large quantities of greenhouse gases.

While the President announced these initiatives at COP26 in Glasgow, I visited US government-sponsored climate resilience projects in Cox’s Bazar. I travelled to St Martin’s Island to see the effects of climate change and learn about local adaptation efforts. While on St Martin’s, I learned about severe coastal erosion and sea-level rise, the impact on local fisheries, the degradation of coral colonies, and local efforts to restore mangroves and protect shorelines.

In the Cox’s Bazar and Teknaf area, the United States has partnered with Bangladesh on many climate resilience projects. The US government, through its Agency for International Development (USAID), recently donated more than 140 renovated cyclone shelters to the Cox’s Bazar district administration, including one on St Martin’s Island, to protect residents from the increasing risk of more frequent and intense storms. Since

2001, USAID has constructed over 700 multi-purpose cyclone shelters that serve as safe havens and schools in Bangladesh. USAID support has strengthened flood forecasting and early warning systems to provide Bangladeshis life-saving time to evacuate to shelter. Our projects increase resilience by creating and improving livelihood opportunities in climate-affected coastal districts. The United States also engages local journalists to strengthen their climate reporting skills to communicate these complex issues more effectively, and support policymakers and an informed populace.

The prime minister’s leadership as the chair of the Climate Vulnerable Forum, a group of 50-plus countries most threatened by climate change, has won the admiration of world leaders. US Special Envoy for Climate, John Kerry, met with Prime Minister Hasina in Dhaka last April, and said at COP26 the Prime Minister ensured climate vulnerable countries’ perspectives were represented in global climate discussions.

The US initiatives announced at COP26 and Bangladesh’s experience and leadership in addressing climate change create an indispensable partnership to address this global challenge. Our two great nations stride forward together into the new year with determination and growing confidence that we can and will protect this vulnerable planet we are so privileged and responsible to share.